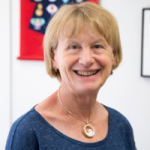 Why I Study Kawasaki Disease

In 1979, I was a resident on the wards at The Children’s Hospital in Denver, Colorado. It was my first month as a “supervisory” resident, leading a team of interns and medical students and admitting children to the ward for care. During that month, we admitted not one, but two patients with a mysterious illness characterized by rash, fever, bloodshot eyes, and cracked bleeding lips. Our attending and all the consultants whom we asked to help were equally puzzled. One day, the intern on the team, Dean Prina, came in holding a new article just published about Kawasaki Disease in the United States. We stopped rounds and poured over the report that perfectly described our two mystery patients. One developed coronary artery aneurysms, the other did not. We had no treatment, so we gave aspirin and waited for the fever and clinical signs to abate. I was struck that there was a new disease about which we knew virtually nothing.

Six months later, I was doing an elective on the infectious disease consult service with Dr. Dick Andersen, the fellow, and Dr. Mimi Glode, the attending physician. A young infant was flown in from Wyoming where she had been hospitalized with 21 days of fever, rash, and various other mucocutaneous signs. All the traditional cultures were negative, and she was transferred to us with the diagnosis of “fever of unknown origin.” After pouring over the copious records and test results, Dr. Andersen concluded that this was KD. The baby died hours later, and I assisted with the autopsy performed by Dr. Harry Wilson. The little heart with the beaded aneurysms on the surface made a lasting impression.

The family returned to the hospital to review the autopsy findings a month later. They handed a paper bag to Dr. Glode and me with $1,500 in small bills that they had collected door-to-door in their community. “We hope you’ll take this money and do research on Kawasaki disease,” they said.

So really KD came and got me. I had no choice. Here was a new disease, a mystery waiting to be solved. I was a smart, young person. This was an amazing opportunity to find the missing pieces of the puzzle. So I jumped in….that was almost 40 years ago. And still, the journey continues…